Info below extracted from an article by Th. M. Akerboom, A new song we raise : [full article in PDF – link dead: html-version]

This first song by Luther was not a hymn for liturgical use, but a ballad, written in response to the martyrdom of Hendrik Voes and Johan van (den) Essen. Luther describes the death of his fellow Augustinians, who were the first to give their lives for adhering to Luthers teaching. The song shows clear parallels with the martyrs’ hymns from the first centuries of the Church. Then too it was not the intention of the writers to raise a monument for the martyrs, nor to bemoan their fate, but – on the contrary – to thank God and praise Him for the exemplars of loyalty and resolution that He had given to his Church. The young men are litterally sanctified, proclaimed to be ‘saints’.

Translation below: from Luthers Works, Vol. 53, Liturgy and Hymns. Philadelphia, 1965, 214-216.
NB:It is not a literal translation. The original text can be found here (with a translation into Dutch) and here (original orthography). Background on the melody used can be found here. 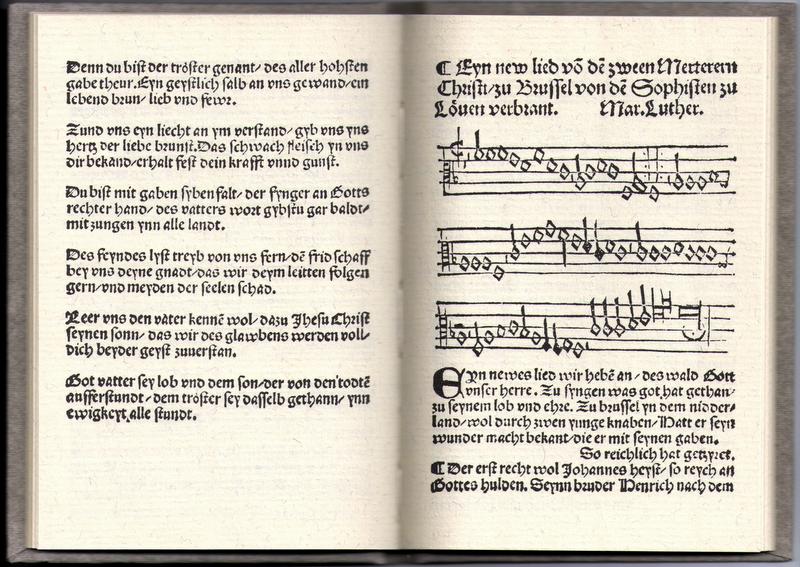 [1] A new song here shall be begun –
The Lord God help our singing!
Of what our God himself hath done,
Praise, honour to him bringing.
At Brussels in the Netherlands
By two boys, martyrs youthful
He showed the wonders of his hands
Whom he with favour truthful
So richly hath adorned.

[2] The first right fitly John was named,
So rich he in God’s favour;
His brother, Henry – one unblamed,
Whose salt lost not its savour.
From this world they are gone away,
The diadem they’ve gained;
Honest, like God’s good children, they
For his word life disdained,
And have become his martyrs.

[3] The old arch-fiend did them immure
With terrors did enwrap them.
He bade them God’s dear Word abjure,
With cunning he would trap them:
From Louvain many sophists came,
In their curst nets to take them,
By him are gathered to the game:
The Spirit fools doth make them –
They could get nothing by it.

[4] Oh! they sang sweet, and they sang sour;
Oh! they tried every double;
The boys they stood firm as a tower,
And mocked the sophists’ trouble.
The ancient foe it filled with hate
That he was thus defeated
By two such youngsters – he, so great!
His wrath grew sevenfold heated,
He laid his plans to burn them.

[5] Their cloister-garments off they tore,
Took off their consecrations;
All this the boys were ready for,
They said Amen with patience.
To God their Father they gave thanks
That they would soon be rescued
From Satan’s scoffs and mumming pranks,
With which, in falsehood masked,
The world he so befooleth.

[6] Then gracious God did grant to them
To pass true priesthood’s border,
And offer up themselves to him,
And enter Christ’s own order,
Unto the world to die outright,
With falsehood made a schism,
And come to heaven all pure and white,
To monkery be the besom,
And leave men’s toys behind them.

[7] They wrote for them a paper small,
And made them read it over;
The parts they showed them therein all
Which their belief did cover.
Their greatest fault was saying this:
“In God we should trust solely;
For man is always full of lies,
We should distrust him wholly:”
So they must burn to ashes.

[8] Two huge great fires they kindled then,
The boys they carried to them;
Great wonder seized on every man,
For with contempt they view them.
To all with joy they yielded quite,
With singing and God-praising;
The sophs had little appetite
For these new things so dazing.
Which God was thus revealing.
Must hear go gladly singing.

[9] But yet their lies they will not leave,
To trim and dress the murther;
The fable false which out they gave,
Shows conscience grinds them further.
God’s holy ones, e’en after death,
They still go on belying;
They say that with their latest breath,
The boys, in act of dying,
Repented and recanted.

[10] Let them lie on for evermore –
No refuge so is reared;
For us, we thank our God therefore,
His word has reappeared.
Even at the door is summer nigh,
The winter now is ended,
The tender flowers come out and spy;
His hand when once extended
Withdraws not till he’s finished.